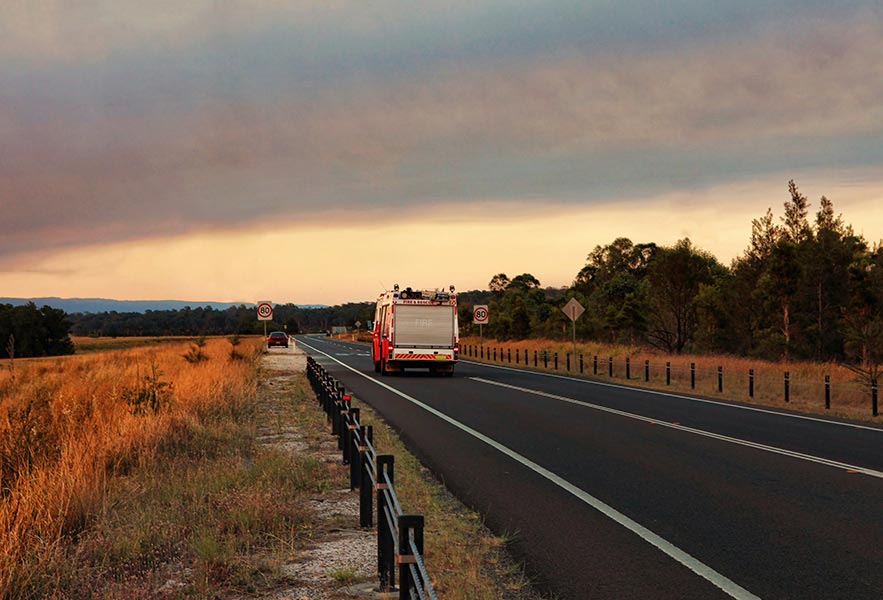 PDC’s Principal Traffic Engineer has led pioneering Bush Fire Traffic Evacuation studies in NSW and WA to assess road network performance in the event of a bush fire. Such work is ground-breaking and driven largely in response to an increasing bush fire threat across Australia, exemplified by extreme events which occurred across the summer of 2019 / 20 in NSW.

Bush Fire Traffic Evacuation studies delivered to date have been driven by the NSW Department of Planning, Industry and Environment (DPIE) and require a collaborative assessment of bush fire risks to a certain geographical area to assess road network performance via traffic modelling and analysis in the event of a bush fire. Similar studies have been delivered at the behest of the WA Department of Fire and Emergency Services and form an increasingly important role in precinct planning across Australia.

Assessment of the road network on such studies has involved VISSIM microsimulation traffic modelling which allows for reflection of complex behaviours and network characteristics, such as modified signal timings in response to atypical traffic conditions, rerouting of trips in response to bush fire, incrementally increasing trips on the road network as a bush fire approaches and assessment of emergency management and assisted evacuation measures, such as road closures.

PDC has unique experience in such studies, having developed the template in close collaboration with Meridian Urban and Government stakeholders including DPIE, NSW Rural Fire Service, NSW Police, Traffic Management Centre, Local Councils and Transport for NSW on a pilot study in 2019.

PDC continues to work closely with Government agencies and the private sector in developing the framework for and delivering such studies across Australia.